Book Bomb time once again, and this is a really special one. 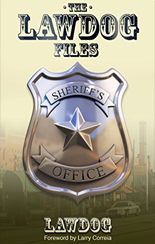 I’ve known the Lawdog for about twenty years now. He was one of the original alpha readers for my first book because we were both moderators on the same gun forum. Ian is a great guy.

As a small town Texas cop he used to post these funny true life stories, and they were hilarious. Seriously, the guy has a gift. Some of these stories have become internet legend, like the amorous armadillo, the pink gorilla suit, and the shootout with Santa.

After nearly two decades of us bugging him, Lawdog has finally written a book!

It was another mutual friend, Peter Grant’s idea that I write a forward. I was happy to do so, because Lawdog is funny, talented, and has a way with words that can be making you laugh one minute, and punching you in the feels the next. I’m so glad he finally put together a book.

It is only in eBook now, but a physical book is coming later. Also, there is another book planned about his childhood in Africa, and then I’ve heard rumors that he is actually going to try and write some fiction. And that I’ve got to see.

The purpose of a BOOK BOMB is to get as many people as possible to buy the same book on the same day. That gets it to go up in the sales rankings on Amazon as much as possible. The higher it gets, the more eyes see it, the more new readers check it out. Success breeds success, and the most important thing is that the author GETS PAID. So please check it out, and if you like it, tell your friends and spread the word.

I use Amazon for this because it has an hourly updating sales rank and half the fun is seeing how high we can make it go, but if you want to buy it from your local store, or Barnes and Noble, or whatever, that’s great because the author still GETS PAID. And the whole point is to get a deserving author with a quality book new fans.

In this case, today is the official release, but word leaked out last week, and people went nuts on this book. It is already a bestseller. Which is great, because Ian is funny as hell, and deserves as many readers as possible. So now we are going to pile on.

EDIT: As of right now here are the stats

Additional note that I forgot, that internet thread where I found the opening quote for MHI? LInes I’d Like to Hear in a Horror Movie Someday? Started by Lawdog. 😀

EDIT 2: It’s still climbing, and that’s got nothing to do with this yet.

To put this accomplishment into perspective, True Crime is a very competitive genre. The previous #1 is from a big deal author, who has been #1 on the New York Times bestseller list, the book has been reviewed in places like the NYT, USA Today, Time, and the Wall Street Journal, and it’s currently #19 on the very big deal Amazon Most Read List.

By the way the blurb for Killers of the Flower Moon actually makes it sound really interesting so I’ll probably snag a copy. Once we’re done competing with him, obviously 🙂

Now the question, can the Dog make it into the Top 100? Tell your friends and let’s go for double digits! 😀

EDIT 6: Oh man, still climbing. We are at the verge of breaking into the Top 100 of all books on Amazon.

That is a big deal right there, folks. Well freaking done.

Plus Lawdog is #1 in the very competitive Humor & Entertainment category. And #4 in Books: Humor… Which means with just an eBook he is right behind guys with eBooks, physical books, audio books, and big marketing pushes like Kevin Hart and Al Franken. And Al Franken is a US Senator and alleged comedian who got a whole auditorium to shill to while I was at Book Expo. Lawdog just had his blog, some rowdy friends on the internet, and a cadre of manatees. 😀

But we’ve already seen before that the Monster Hunter Nation is equivalent to most big publisher’s whole marketing departments.  You guys rock.

NEXT MORNING EDIT: I went to bed, but according to people who stayed awake last night the Lawdog Files got to be the #87 bestselling eBook on all of Amazon. Good work, everybody.