The tour is done! And despite American Airlines best efforts to stop me, I am home!

As far as fans showing up, this was the biggest book tour I’ve ever had. Despite most of the events happening in places that were covered in freezing rain, lots of you braved the weather to show up, and I really appreciate it.

First up, thanks Gerry Martin and Jason Cordova for live streaming my NoVA visit. If you would like to see what one of these events are like, the link is here:   https://www.facebook.com/gerrybm/videos/10101195517026472/  (the first part is just me visiting. The actual event starts at like 15 minutes in)

Yeah, I talked and answered questions for almost two hours before signing. That’s pretty normal for me.  I usually show up early to shoot the bull with whoever got there early (which in this case was about a hundred people), I talk about what I’ve got going on, and then I take questions.

The only sad part about this video is that shirt makes me look way fatter than I am. It is baggy because I’ve lost a bunch of weight, but I love my Cthulhu shirt so haven’t retired it yet. In my defense, Cthulhu is awesome.  (and the shirt was a gift from a fan at GenCon)

Before tour started there was some rivalry between Houston and Dallas as to who would be bigger. Of course, I encouraged this. Houston had a great showing, but then Dallas was bigger, and looked to be this year’s Larry Bowl Champion. But then Kansas City rallied and almost took Dallas, but they hung onto their lead until Northern Virginia swooped in and crushed it.

A note on the masks. These were at all the signings. They’re from the cover of the first book Son of the Black Sword. Baen made a ton of these for some of the big cons, and since they had boxes left they shipped them to the bookstores for me to hand out to fans. And they told the bookstores that whichever one had the best pic with my fans, they’d buy pizza for the store employees.  (and pizza is one hell of a motivator)

I flew to Minneapolis first (and got to sign with Mike Kupari), then flew to Houston, then drove to Dallas, Oklahoma City, Wichita, Kansas City, Edwardsville Illinois, (put 1,400 miles on that rental car) then spent the day stuck in the St. Louis airport because of delays, then flew to Washington DC, then drove to Tyson’s Corner, then Norfolk (put 300 mile on that rental car), then spent another full day in Chicago O’Hare because American Airlines is incompetence incarnate.  Then I went to LTUE in Provo Utah for two days.

When I’m on tour with a rental car, I don’t just go from event to event, I try to hit as many of the other local book stores as possible to sign stock and meet the employees. (You always hope for a fan on staff, because if you’ve got a fan on staff you sell 100x as many books in that particular store). I can’t actually tell you how many bookstores I hit along the way, but it was a lot.

Sadly I can’t really identify where each of these pics took place, just because after hitting a different bookstore every day for two weeks, I can’t really remember which is which.

Like this one I was with Wendell the Manatee… Which means it was either in Texas or Oklahoma City. I think…  EDIT: It was Wichita! Book tour is tough on your brain. But anyways, that’s the same manatee who inspired the Target Rich Environment 2 cover with me and Bridget posed like a Conan cover.

Okay, the one below is Dallas, but I only remember that because of the Half Price Book sign behind me.  🙂 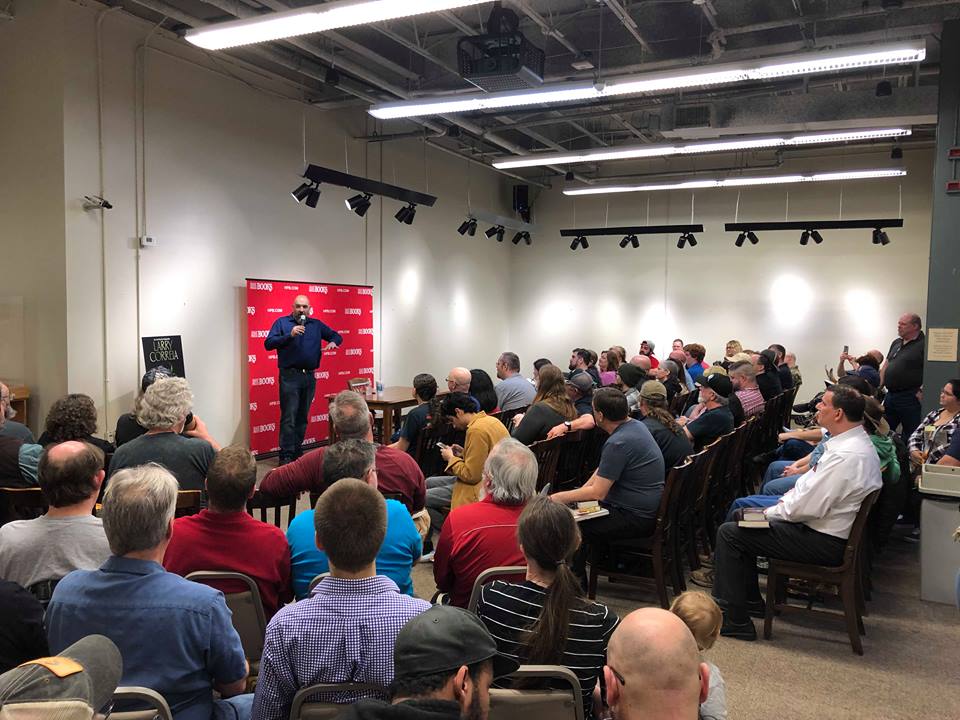 I believe this one is Houston.

This was Kansas City. Which surprised the heck out of me because the weather was crap all day. I think we had 115 people at that one.

This is Edwardsville Illinois, which is just across the river from St. Louis. And this one was a real surprise because it was dangerous freezing rain that day. Seriously, I drove from Kansas City that morning, it took six hours, and I counted 55 wrecks, slide offs, and abandoned cars and trucks on the side of the road. I was impressed you guys showed up at all! 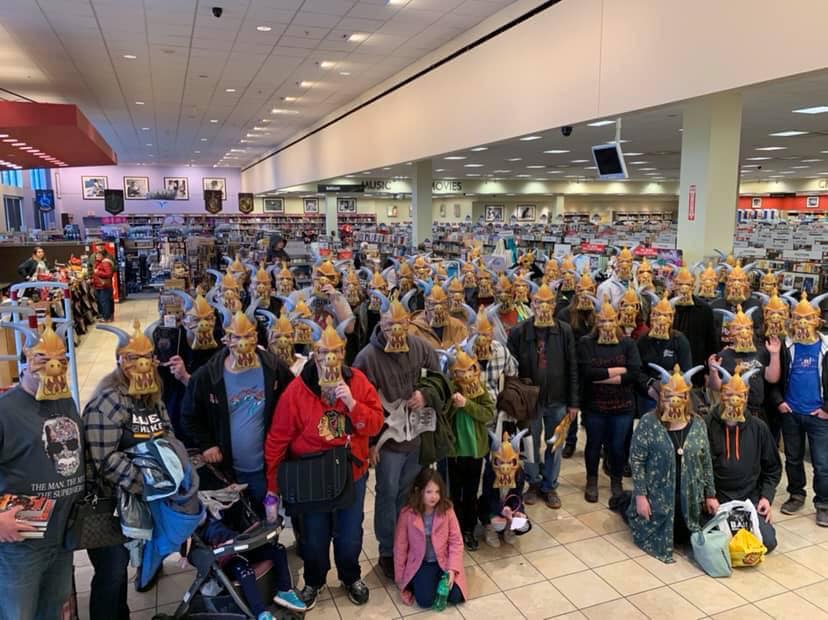 Sadly, even though many of these events were among the bigger (and far more enthusiastic)  signings these stores had had, I still did not reach the arbitrary number of attendees that my critics insist are routine for all Real Writers book signings. (yeah, what do bookstore managers know?)  Maybe next year. 😀

I’ve got a ton of pictures of all the events, and hanging with different fans on my Facebook page. (If I post too many big ones here, WordPress crashes. Thanks, WordPress!) But one picture in particular I wanted to stick up. Yes. That is Interdimensional Insurance Agent, Tom Stranger. He even had the business cards and Combat Wombat to prove it.  I of course am looking up in terror at the interdimensional rift which opened at the event.

This was a really fun tour (except for any parts involving American Airlines, obviously). I got to meet a ton of interesting people, hang out, talk, see places I’d not been before, and eat lots and lots of local food. (Oh yeah, the whole intermittent fasting, low carb thing goes on hiatus for book tour. When you are on tour you eat when/what is convenient).

Thanks everybody who turned out. It was great. The House of Assassins launch was a huge success.

by Larry Correia and Steve Diamond

by Larry Correia and John Brown