It is that time of year again. If you’d like to nominate good books, stories, and related works for the Hugos so that the biggest award in sci-fi/fantasy isn’t just a Social Justice Warrior circle jerk, you need to get yourself a supporting membership to Sasquan before the end of January.

Supporting memberships are $40. If you registered last year as part of Sad Puppies 2, you are still eligible to nominate this year.

Because I’ve been swamped with Sons of the Black Sword and a new Warmachine novel, I’ve not had a chance to prepare any new Heart Felt Plea cartoons (and I am a remarkably slow and untalented artist) so let’s recycle some old ones!

So please watch this very special commercial that we prepared last year, which in no way was ripped off of Sarah McLachlan’s sad puppy video.

Now our SP3 spokesmanatee would like to share a few thoughts about why it is so important that you help to combat the scourge of PRS. . 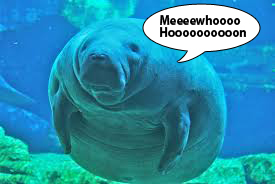 Thank you, Wendell. That was so profound I may have shed a single manly tear.

This year we will be expanding the suggested slate to include several other authors, artists, and creators who are usually locked out by the SJW voting block. The men and women of Sad Puppies want to get more fans involved, even if they’re the *wrong* kind of fans. We want people to vote based on what they loved and enjoyed, not on what sends the approved message or checks the right box.

You need to register now in order to be able to participate, but your actual nominations are not due for some time. In the comments feel free to suggest other eligible works that you think we should take a look at.

And please tell your friends. Help spread the word, because only you can stop PRS.

EDIT: For those just joining us who missed last year’s controversy, here is a recap of what happened when a bunch of barbaric outsiders got nominated:  https://monsterhunternation.com/2014/04/24/an-explanation-about-the-hugo-awards-controversy/

EDIT 2: Hello to the GamerGate readers who’re stopping by because of Nero’s plug. To clarify, normally all supporting members get a packet of ebooks consisting of all of the nominated works, so they can read them before judging. So the membership is $40, but you normally get way more than $40 worth of reading material (and if we get our way, it won’t all suck!).

by Larry Correia and John Brown