Okay, lots of stuff going on this month.

Usually I link to my blog posts on Facebook, but I’ll just have to count on you guys to share this one for me because I caught another 72 ban.

It wasn’t even for my last blog post where I once again point out that Mike Glyer is a scumbag parasite shit weasel. It was for a brief post the night before, after Jesse told me the idiots were talking about me on File 770 again, I tagged Richard Fox, and asked for the details of Glyer pirating him. All I said was “Glyer needs to learn to keep my name out of his whore mouth”.

These people are very predictable.  As I’ve said before the biggest difference between the right and the left in America is that the left wants to silence everyone who disagrees. The right wants the left to keep talking so you can see how crazy they are.

On that note, if you haven’t yet, read through the comments of the last blog post. The only reason I haven’t banned the extremely unctuous Canyonero Featherduster yet is whenever he shows up to debate (in a place where he can’t later go back and edit his comments) he is a wonderful display of just how full of shit his side is.  Rule #1 of Internet Debate, you don’t do it for your opponent, you do it to sway the audience.  His worm tongue nature shows how scummy they are far better my blog post ever could.

EDIT: I just realized what today is! But apparently at File 770, every day is Talk Like a Pirate Day! 😀

So, now onto the update:

I’ve got two releases coming up soon, both of which I’ll put up their own Amazon preorder post shorty.

Invisible Wars is the omnibus collection of all three Dead Six novels (Dead Six, Swords of Exodus, and Alliance of Shadows) that I wrote with Mike Kupari. It will be out October 1st.

That series is my least known work, I think mostly because they get stuck in with the thrillers all by themselves, instead of with the rest of my stuff over in sci-fi and fantasy. But they are really good. Think thieves vs. mercenaries fighting each other in the shadows in a 3rd world country that is melting down into a military coup. And the series just gets crazier from there.

I write one character (Lorenzo) and Mike writes another (Valentine) and it’s these two poor bastards on opposing sides, trying to kill each other, because they are both pawns of these gigantic global conspiracies. We had a lot of fun with it too. Basically Lorenzo works for the organization that is every right wing conspiracy nut’s worst nightmare, and Valentine works for the organization that is every left wing conspiracy nut’s worst nightmare… Only if you’ve been watching the news for the last few years, we got way too much stuff right, so maybe those guys aren’t nuts after all.  😀

Target Rich Environment 2 will be out December 3rd. This is the second volume of my collected short stories, and has quite possibly the best cover ever due to the presence of the Lovely Mrs. Correia in a fur bikini.

I kid you not.  But even without the cover it’s a collection of a bunch of really fun stories from my various universes and some belonging to other IPs. It has Agent Franks teaming up with Joe Ledger, stories from Aliens, and Predator (but not Aliens & Predator!), a Warmachine novella, more MHI, more Saga of the Forgotten Warrior, more Grimnoir, one of my first short stories ever Son of Fire, Son of Thunder, AND TOM STRANGER 2: A MURDER OF MANATEES.

The eARC for TRE2 is available from Baen right now: https://www.baen.com/target-rich-environment-volume-2-earc.html

On the writing front, my deadline for Destroyer of Worlds is October 31st. I am working on that currently. This is the 3rd book in the Saga of the Forgotten Warrior, and picks up a few months after the end of House of Assassins. It is bad ass.

Then I need to do a short story for the Libertycon Anthology that Baen just announced, in honor of the amazing Uncle Timmy Bolgeo, who was a great guy.

After DoW is done I will be turning all of my attention to the sci-fi collaboration with John Brown. John, being a professional, has been done with his first part and waiting patiently for me to do my thing. Building a house, moving, and fixing the old house to sell it has put me several months behind where I should be for the year.  But John is a good dude, super talented, and I am really excited to dive into this one (think space pirates who specialize in stealing giant fighting robots).

After that I’ve got a really cool top secret project that I can’t tell any of you about. 😀

After that I’m not sure which project I will be working on, but I’ve got a giant pile of contracts to fill. (basically when my contract pile starts getting low, Toni calls, and says, hey Larry, what else are you excited about?) There is lots more MHI, more Forgotten Warrior, and another whole Grimnoir trilogy (starting in 1954, Bombshell in Noir Fatale and Tokyo Raider in TRE2 are previews of that one)

The new Savage Worlds MHI RPG is ALMOST DONE! Yay! Everybody involved in that has been getting the update emails, so you know where we are at. Very soon you should have the books in hand. I’ve got my proof copy. It looks phenomenal. And the Savage Worlds Kickstarter is fulfilling now, so I just got my core book from them a little while ago.

Vault Books still has some of the leatherbound, numbered, Hard Magics available. They are working on Spellbound now. It is truly the best looking book I have ever seen. I sold a bunch of them at Salt Lake ComicCon last week because everybody who touched the demo copy wanted one… until they saw that really fancy books cost more than the regular books. 😀

Having just gone through a very busy period of life, with building, moving, and selling houses, we said, life is starting to calm down again… I KNOW. LET’S GET A PUPPY.

Sure, I know it has been three years of chaos, buying a big chunk of land, developing it, roads, wells, miles of trenches, and then building a gigantic friggin’ house, and then moving all our crap, and then fixing up the old house, you know what would be really amazing? Sleep deprivation.

He is Faust, the Krasnovian Waffle Hound. At 8 weeks old, he is 3 pounds of vicious Krasnovian fury, born and bred to hunt down Pinelanders. But until he finds any Pinelanders, he spends his time waking up at really weird hours of the night needing to go outside to poop, and attacking our shoes.

If you’ve seen the pics and videos I’ve put on Facebook (at least when I’m not banned because telling the truth about China Mike is “hate speech”) Faust is adorable. Luckily he is even adorable enough to make up for the fact that potty training a puppy is a giant pain in the ass.  And last night he actually slept from 10:00 PM to 4:00 AM, which is most uninterrupted sleep I or Bridget have gotten in the last two weeks, which was AMAZING.

How his name came about is kind of funny. My youngest son really wanted a German Shepherd. This dog is a mutt. Meaning his dad is a poodle, and his mom was an Australian Shepherd. So we told my son that the Shepherd part of Shepherdoodle, meant GERMAN Shepherd (obviously). So when we got him, my boy insisted that he needed a proper German name. Which made us list off all of the proper German names we knew for the ride home, such as Blitzkrieg, Rammstein, Luchs, Murder Turtle, Hetzer (gonna Hetz), Klaus, Fritz, etc. When older son threw out Panzerfaust, that kind of stuck, and got shortened down to Faust.

So now I have a 3 pound puppy whose name means Armor Fist.  Hopefully he will continue letting me sleep, because I’ve got books to write.

Another Example of Why Facebook is the Abusive Trailer Park Husband of the Internet
Not a Book Bomb, but the next book in a series I Book Bombed just came out 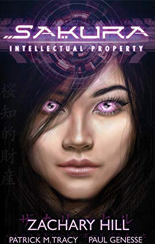